thumb|link=Nonstop Nicktoons Weekend was a US marathon featuring Nicktoons during Thanksgiving weekend.

This big marathon of Nicktoons has been presented every US Thanksgiving weekend on Nick since 1993. That first year, the marathon ran Friday to Sunday from Noon ET to 8PM ET, and, apparently, featured the first 4 Nicktoons in rotation -- Doug, Rugrats, Ren & Stimpy and Rocko. Every year, as more and more Nicktoons are added, the marathon gets larger, to a point where some Nicktoons aren't featured at all. The 2000 edition ran from Thursday to Sunday, 6AM ET to anywhere from 8:30PM ET to Midnight ET. Some years had hosts, such as Stick Stickly in 1995, Kenan & Kel in 1996 and the Nicktoon characters themselves in 1997. Some years also had special features -- in 1997, viewers sent their pictures and questions of their favorite Nicktoons, described on air by Angelica; in 1999, special facts about the Nicktoons were presented during the breaks; and in 2000, shorter animated shorts were seen at the breaks.

The 2002 edition was hosted by the All That cast, who also answered left|thumb|link=various questions about the Nicktoons, submitted by viewers online at Nick.Com. However, about half of the Nicktoons line -- including Thornberrys and Zim, are missing, and, for some reason, Jimmy Neutron deserved 3 marathons and ChalkZone gets two, even though both series had barely enough episodes available for one marathon. 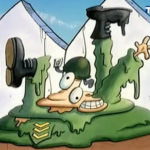